I recently made a purchase from Concrete Minerals. They are a cruelty free & vegan cosmetics line that makes loose mineral shadows, lip tints, and shadow primer.

Previously I had only tried one of the matte shades. I ended up loving it so I wanted to buy more and test them out!

I had a hard time deciding on what colors to purchase. They have so many, so I opted for buying their Black Magic collection, and also two more shades that came in a MUA inspired bundle. In total this was 6 shades.

This collection has beautiful purple and blue shades. Each pot is 2 grams/ .07 oz. The jars are adorable but also sturdy and do have a sifter so the do not get messy.
Séance is described as a deep purple with lavender sheen. I definitely see alot of navy when swatched and when on the eyes. I really like this color!
Wicked is described as a medium purple with an aquamarine shift. It translates to swatch as a periwinkle blue, but definitely pulls more lavender when on.
Bitches Brew is described as an electric lavender with golden-orange shift, and it is exactly that! I will probably use this one the least since I’m really not a pink type of gal.
Arsenic is described as a shimmery red-brown with blue undertones. This is one of my favorite colors! It has such a gorgeous shift and looks really nice on the eyes.

All of these shadows are insanely pigmented, easy to work with and blend well. These work best when either applied with fingers, or over an eye primer. These also work excellent if you dampen your brush before using. I would highly suggest also purchasing their eye shadow primer. The shadows have much more staying power when used over a primer. I also found the colors didn’t remain as vibrant without a primer.

The Electric Eye Primer, which I also purchased, was used for all swatches as well as when I have applied and worked with these shadows. I really enjoy this primer. I have had no creasing and they shadows stay all day. There is some loss of glitter in the shades that contain more noticeable glitter, but nothing major. I would suggest using a very small amount of primer. A little goes a long way. I found that if I used too much, the primer will basically roll off.
You apply the primer, and smooth it until it does not feel oily.
I always have a tough time finding good vegan primers, so I’m really happy about this one!

Overall I’m very happy with the performance of these shadows. They have sturdy adorable packaging, and Concrete Minerals has great customer service. I received my order promptly.

The Black Magic collection is listed for $32, but currently on sale for $28. You can purchase it here.

The MUA inspired @nicola_kate collection is listed for $16, but currently on sale for $14. You can purchase it here.

The Electric Eyeshadow Primer is $12, and you can purchase it here.

Here is a look where I used two of these shadows, and the primer.

I used the shades Smut & Séance.

To see full details on what was used in this look check out this post!

A licensed esthetician & cosmetologist with a huge collection of products & tricks of the trade to share with you. Out to show you that glam doesn't have to be at the cost of compassion. Cruelty free is easy! View all posts by beautywithmorgan 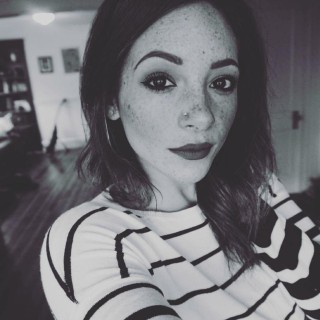 A licensed esthetician & cosmetologist with a huge collection of products & tricks of the trade to share with you. Out to show you that glam doesn't have to be at the cost of compassion. Cruelty free is easy!